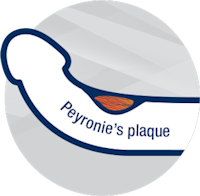 Some curves are minor and fall within the scope of 'normal' penile development and don’t result in unsatisfactory sex. Some are more problematic and are often caused by a condition known as Peyronie’s Disease. Penile curvature from Peyronie’s results from the formation of a dense 'plaque' made of collagen that leads to kinking of the penis and prevents full expansion of the tissues within penis that lead to erection. Men with this condition consequently notice that their penis can be curved, shorter or narrowed. Often men feel that their erections are not as firm. Collectively, this can make sex difficult and unsatisfying for both men and women.

Surgical correction has historically been the most effective treatment for men with this condition who struggle to enjoy sex. Surgery works well but is invasive and carries risk. Oral medications have demonstrated limited evidence of a treatment benefit, but some men do respond.

Recently, Health Canada approved a new treatment for penile curvature cause by Peyronie’s Disease called Xiaflex or collagenase clostridium histolyticum (https://peyronies-disease.xiaflex.com/patient/). This treatment involves a series of injections directly into the plaque with a small needle using local anesthesia. The collagenase medicine works to digest the dense collagen fibers within plaque leading to less penile curvature. Several well-designed scientific studies have shown that Collagenase can improve penile curvature, reduce plaque volume and improve erections. Most men report about a 35% improvement in penile curvature after treatment. 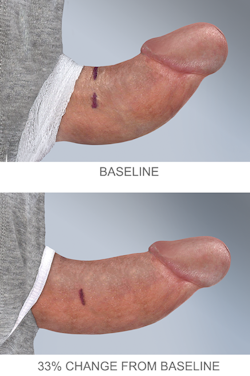